US refocuses on Central Asia after Russia's show of Eurasian solidarity 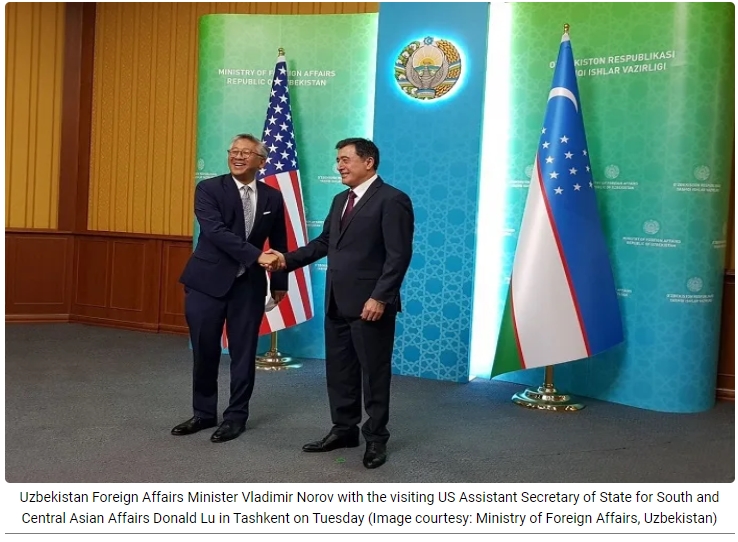 As Eurasia becomes a hotbed of strategic alliances amid growing geopolitical uncertainty stretching from Afghanistan to Ukraine, the United States has dispatched a high-level delegation on a five-day visit to Kyrgyzstan, Uzbekistan, Tajikistan and Kazakhstan to strengthen its relations with the Central Asian countries.

Led by Assistant Secretary of State for South and Central Asian Affairs Donald Lu, the US contingent began its tour of Central Asian states from the Kyrgyz capital Bishkek on Monday and held meetings in Uzbekistan on Tuesday.

The US Department of State said that the aim of the delegation's visit is to strengthen US relations with the region and "advance collaborative efforts" to create a more connected, prosperous, and secure Central Asia.

In his first meeting of the tour, Donald Lu discussed current issues of the Kyrgyz-American relations as well as regional and global agenda, with the country's Foreign Minister Jeenbek Kulubaev.

As Moscow and Beijing continue to show massive interest in the region, Washington stressed on the importance of building practical cooperation that can have a positive impact on Kyrgyzstan's socio-economic development and also considered the possibility of increasing investment cooperation. "The parties considered the issues of minimizing the negative impact of international sanctions on the economy of Kyrgyzstan and the necessity to intensify assistance in strengthening border security. Separately, they noted the importance of interaction between the countries in the framework of the 'C5+1' platform," said the Kyrgyz foreign ministry.

In Tashkent today, the American delegation met with Uzbekistan Minister of Foreign Affairs Vladimir Norov as both sides discussed the current state and prospects of Uzbek-US relations in various fields.

"The American side praised the changes taking place in Uzbekistan under the leadership of President Shavkat Mirziyoyev, as well as the practical and open foreign policy of our country. It was noted that the US government is ready to actively support the reform process in Uzbekistan," said the Uzbek foreign ministry in a statement Tuesday.

While discussing the preparation for their next Strategic Partnership Dialogue in Washington, both countries said that they are interested in continuing cooperation in the form of 'C5 + 1' in order to achieve concrete results in the fields of infrastructure, energy, transport, environmental protection and climate change.

"Uzbekistan's efforts to provide humanitarian assistance to Afghanistan, to promote long-term peace in the country and to promote projects aimed at its economic recovery were praised," the statement added.

The US Assistant Secretary and the accompanying delegation will now travel to Tajikistan to meet with senior officials and participate in US-Tajikistan Annual Bilateral Consultations to promote economic ties and strengthen security cooperation.

They will wind up their visit after holding discussions with senior Kazakhstani officials and civil society leaders in Nur-Sultan.

The Biden administration's renewed focus on the region comes immediately after Russia-led Collective Security Treaty Organization (CSTO) vowed to raise cooperation to a "qualitatively new level of allied relations" to counter "a wide range of modern challenges and threats".

On May 16, even as Moscow's 'special military operation' continued in the neighbouring Ukraine, the leaders of the CSTO member states, including Presidents of Belarus (Alexander Lukashenko), Kazakhstan (Kassym-Jomart Tokayev), Kyrgyzstan (Sadyr Japarov), Tajikistan (Emomali Rahmon) and the Armenian Prime Minister (Nikol Pashinyan), had converged at the Kremlin to intensify their partnership. Interestingly, Mirziyoyev had a telephone conversation with the Russian President Vladimir Putin while the US delegation was holding discussions in Tashkent today.

"The leaders of Uzbekistan and Russia stressed the importance of deepening cooperation between the business community and the effective use of the great potential of interregional ties," the top Uzbek leadership highlighted while noting that the trade turnover between the two countries has increased by 40%.