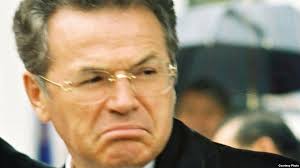 As the ex-mayor of Almaty, Kazakhstan, battles allegations that his family systematically looted hundreds of millions of dollars in public funds, a U.S. magistrate approved sanctions Monday against this mayor’s son.

Part of international litigation about missing billions funneled around the world, the sprawling case stems from an audit by PricewaterhouseCoopers that discovered a $10 billion hole in the books of Kazakhstan’s BTA Bank.

The elder Khrapunov served as the mayor of Almaty, a city of approximately 1.7 million people on the foothills of the Trans-Ili Alatau mountains, between 1991 and 2004.

Though Khrapunov and his family have fended off claims by Almaty and Kazakhstan’s BTA Bank from Switzerland, where they now live, Kazakh prosecutors also opened up a criminal probe against BTA’s Ablyazov, a fugitive billionaire who styles himself a persecuted victim of his nation’s strongman Nursultan Nazarbayev.

In this complicated tale of fugitive oligarchs, a New York judge voiced her frustration at the former mayor’s family for leaking confidential documents and ducking court proceedings.

“The court noted that Ilyas Khrapunov has played games with the court in the past and cited, as one example, the fact that the Khrapunovs requested to appear at the evidentiary hearing by phone but later retracted that offer, claiming that it would violate Swiss law to testify at the hearing while residing in Switzerland,” U.S. Magistrate Katharine Parker wrote on Monday, upholding prior monetary sanctions against Khrapunovs.

Matthew Schwartz, an attorney for Almaty and BTA Bank with the firm Boies Schiller Flexner, said the ruling demonstrates the Khrapunovs lack credibility.

“BTA Bank and the city of Almaty look forward to presenting their claims at trial, where we are confident a jury of New Yorkers will come to the same conclusion,” Schwartz said in a statement.

The Khrapunovs’ attorney Jeffrey Miller, of the firm Hoguet Newman Regal & Kenney, did not immediately respond to an immediate request for comment.

Though not a focus of the New York lawsuit, the case of the fugitive Kazakh oligarchs has drawn press scrutiny for its reported connections to President Donald Trump.